Any company that has been developing coolants for some time has developed the muscles required to pass the traditional ASTM tests that validate proper corrosion protection, stability, material compatibility, pH and freeze point (to name a few).

The coolant consumer can be assured the product they select has gone through the same stringent testing as every other product on the shelf.

This has undoubtedly led to consumers making purchasing decisions based upon brand loyalty or cost.

But new-energy vehicles are changing this in a few ways:

We have previously explored how to ensure protection of the different metals found in new-energy vehicles. This article will explore how and why original equipment manufacturers (OEMs) and consumers can select a coolant that can reduces safety risks associated with batteries and leaked coolants. 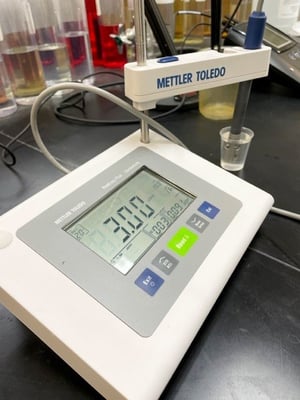 Electrical conductivity for coolants is measured in microsiemens per centimeter (µS/cm). A sample conductivity meter setup can be seen in the image to the right. The test probe is dipped into the coolant solution, after which the conductivity reading typically appears within seconds.

The time has come for coolant manufacturers to not only add “electrical conductivity” to their vocabulary but also to develop standard testing protocols for this specification.

Since there are not yet ASTM standards for new-energy vehicle coolants, we have noticed that not all electrical conductivity test results are created equal. Specifications vary by OEM.

We will now explore:

If there's one thing for certain, it’s that the electrical conductivity range of 3,000 µS/cm to 5,000 µS/cm will be too high for most, if not all, new-energy vehicles.

Most electric vehicles on the road today are using standard off-the-shelf organic acid technology (OAT) coolants that were manufactured for the internal combustion engine. The main reasons are: 1) there were no EV coolants on the market then and 2) there were no specifications requiring lower electrical conductivity.

Over the past 12 months or so, both conditions have changed.

What we have found is that although there is a range for the specifications our new-energy vehicle partners have requested, they tend to cluster around similar numbers depending on if they are an electric vehicle or a fuel-cell vehicle manufacturer:

We have been in the coolant industry for a long time. It’s no surprise to us that when the industry was asked to leap, the industry said how high. There are now a few electric vehicle and fuel-cell vehicle coolants that meet these specifications. Each of the companies that made the necessary technological breakthroughs has delivered a product better suited for new-energy vehicles than your grandfather’s coolant.

However, the lack of ASTM testing protocols has exposed some variation in how electrical conductivity is reported.

We must evaluate the coolant over both time and temperature.

Five coolant samples were chosen which are currently being used in EV indirect cooling. These are coded as:

An experimental setup of a Parr reactor test is shown in the image below. 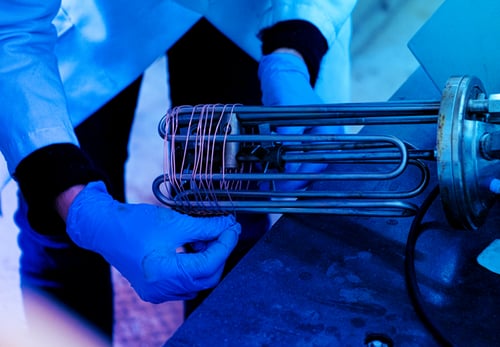 The test conditions used are as below:

These parameters were considered since earlier [1] authors from Dober and Cummins Fleetguard developed this method to model primarily the thermal stability of heavy-duty coolants in 300,000-400,000 miles of actual service.

The increase in ion concentration in a closed-loop fluid stream may occur due to ion leaching from metals and nonmetal components with which the coolant fluid is in contact. During operation, electrical conductivity of the fluid may increase to a level that could be harmful for the cooling system.

The electrical conductivity of J1 starts increasing immediately during the start of the Parr reactor. By the end of 450 hours, it attains the highest percent change in conductivity (450%).

Under the same test conditions, D1 and other coolants' electrical conductivity remain below 25%. It is interesting to note that the initial pH of J1 is lower than all other coolants. However, after 482 hours it has the highest drop in pH.

The Parr reactor experiment clearly indicates that ion leaching of both metals contributes to an increase in the electrical conductivity of the coolant fluid.

In short, you should be careful to select a coolant based upon initial electrical conductivity without testing over time and temperature. 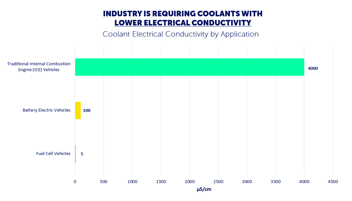 5 Things You Need to Know About Fuel Cell Coolants

We've written about the shift to electric vehicles and those newer vehicles' coolant needs — but...