The Worst Legionella Outbreaks and Preventing Disaster with Water Treatment

There is a grave threat to patrons and staff of hospitals, schools, hotels, and countless other facilities due to negligence of simple maintenance: water treatment to prevent growth of Legionella Pneumophila, the bacterial cause of Legionnaires Disease. Legionnaires Disease, commonly referred to as Legionella, is a severe type of pneumonia that is often deadly. In cooling towers and other water sources that are not properly treated, the Legionella bacteria has ample opportunity to grow in dark, wet environments and taint the water that gets circulated through a facility. The bacteria spread through mist (aerosolized water) or aspiration (choking secretions that enter the lungs). So how much of a concern is Legionella as a facility owner or manager? Here we review the most tragic incidents of Legionella to demonstrate why water treatment is a necessity in your facility.

The 3 Worst Legionella Outbreaks of All Time

Case 1: Legionnaires Disease Strikes ‘First’ and Worst at a Hotel

The 1976 outbreak of Legionnaires Disease in Philadelphia was the first time the disease was publicly recognized, as well as the worst case in history. The American Legion, for which the disease name was coined, had gathered at the Bellevue Hotel in Philadelphia for a convention. In the days following the gathering, attending Legionnaires and others in the hotel suffered from pneumonia symptoms. Over 220 infections were reported, leading to the highest Legionella death toll at 34 people. The source of the infection was identified to be the hotel’s air conditioning system. This particular case lead to the initial identification of the Legionella bacteria, and subsequently the retroactive diagnosis of previous outbreaks.

In April of 1985, Legionella bacteria developed in the U-trap under the chiller at Stafford District Hospital in England, and were spread throughout the hospital via cooling tower. Staff and patients were affected, with the reported number of treated infections ranging from 150 to 170. The death toll was confirmed at 28. But the reach of the bacteria permeated far beyond those figures, as one-third of hospital staff was determined to be carrying Legionella antibodies, causing mild respiratory symptoms. These infections arose for at least 5 months beyond the initial discovery of the outbreak¹.

Hot tubs can be another source of Legionnaires Disease — in fact, hot tubs caused one of the deadliest Legionella outbreaks in 1999 at a flower show in Bovenkarspel, Netherlands. Three hot tubs were being displayed as part of an exhibition. They were filled with a fire hose that had been long stagnant. The undisturbed, untreated water in the hose had been a perfect growth medium for Legionella bacteria. And because the hot tubs were for exhibition only and would not be occupied, chlorine was not added to the water. Without water treatment, Legionella was able to spread through the steam coming off the water and enter the lungs of passersby. Consequentially, 206 reported infections occurred, with a tragic 32 fatalities.

Though these three worst cases are from 20 years ago or more, Legionella is far from a thing of the past: Outbreaks still occur, and many in the U.S. from the last few years are still affecting the public to this day. For instance, in Bronx, NY, many water cooling towers had been found to test positive for the Legionella bacteria in 2015, which caused at least 128 infections and 13 deaths. These cases are still under investigation by the New York City Health Department.

Another outbreak that erupted in 2015 is still causing infections at a Veterans Home in Quincy, Illinois. Fourteen deaths and over 50 infections have occurred over a span of several years, due to water treatment neglect. Though the first infections were diagnosed years ago, the large, complex nature of the building and its plumbing system create ongoing problems. The CDC warns that the bacteria may not even be fully removable in such an environment.

Though awareness and the advent of water treatment technologies have improved the rate and severity of Legionella outbreaks, these examples demonstrate that inconsistent and ineffective water treatment practices can still lead to long-lasting, tragic effects.

The only way to prevent Legionella in large facilities is to implement a well-maintained water treatment program. There are two main components to quality water treatment: A good service representative and a good biocide treatment strategy.

It is equally important to develop a good biocide strategy with your water treatment representative. You should discuss your goals and how they relate to cost, reliability, safety, and performance. If you require a high volume of chemicals and frequent representative visits, you may want to keep your chemical costs as low as possible. If you have a medium-sized cooling tower or are in a critical cooling scenario you may value reliability and safety. Discussions such as these will help your representative design a program based upon your goals. One industry trend is to use solid biocides instead of liquid biocides. There are a few reasons why applying biocides in solid form instead of liquid has been becoming more common.

One major problem faced by treatment programs using liquid biocides is broken pumps. Pumps that force the liquid biocide into the water system often break, without any indication of being broken. In this case, chemicals may be added to a cooling tower religiously, without necessary dispersion of the biocide — rendering the chemicals, time, and costs completely ineffective. Meanwhile, issues with pumps breaking are negligible with solid biocides, as the solid biocide disperses itself as long as water runs over it. With a solid, you can set it and forget it without any worry of system malfunction or non-dispersion.

Another problem with a liquid biocide is its volatility and harshness. Liquids are prone to spilling and splashing, which can harm a person or material if they come into contact with the chemicals. However, with solid biocides, the danger and diminished effectiveness associated with liquid spillage are entirely avoidable. Solid biocides are also more environmentally friendly than their liquid counterparts, as liquid biocides require considerably more packaging materials.

Smart Release Technology from Dober is the leading solid biocide for preventing growth of the Legionella bacteria. Dober can also connect you with a local, reputable water treatment representative — putting together all of the pieces your facility needs for an effective water treatment plan. With an estimated 20,000 annual cases of Legionnaires Disease in the United States alone², it is essential to your business’s reputation and the community’s health to use the best chemical treatment available for your cooling tower.

ARE YOU AWARE OF THIS HIDDEN CHEMICAL HAZARD IN YOUR SCHOOL?

Schools everywhere, at every education level, face increasing numbers and types of safety and... 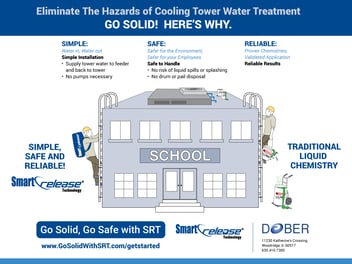 NON-CHEMICAL AND OTHER ALTERNATIVE WATER TREATMENT OPTIONS FOR COOLING TOWERS