“Hidden residues” is a term we use to refer to residues that are difficult to see under standard facility lighting and conditions, as well as those that cannot be visibly detected at all. It's important to be aware of the potential for creating these types of residues and to have a cleaning program that effectively addresses them in order to ensure that problems do not occur in the future.

Residues that remain undetected can result in failures on swab and rinse water testing. In addition, any residue that is missed can become a food source for microbes. These problems become compounded when these products build-up over subsequent batches trapping pigments and contaminants from the new product batches. All of these scenarios can result in contamination, the need to reclean, and the potential loss of production batches.

Use of a proper detergent and cleaning process can ensure that these hidden residues are broken down and effectively removed from the equipment train. However, it is difficult to know if a cleaning product and application are successful if failures cannot be effectively seen.

Dober has employed several strategies to detect hidden residues and ensure their removal.

Soils that contain pigments and other insoluble solids can leave behind faint particulate and hazes. Due to the large scale and complex design of production equipment, there can be areas that are very difficult to see, especially under standard fluorescent facility lighting. When faint residues are combined with these conditions, there is the possibility of overlooking visual failures.

At Dober, we inspect our test surfaces under both standard fluorescent lighting as well as with a 50-watt Halogen light. This more intense light source can make hazes and faint particulate stand out, becoming much more visible. The coupon in the video contained a mineral sunscreen residue. When removed from the cleaning solution it appears clean until the surface is dried and viewed under a stronger light source. The photos below show a similar stainless steel coupon that was soiled with a pigmented cosmetic foundation. An ineffective cleaning process was performed, leaving behind residues. The photo on the left represents inspection under typical fluorescent laboratory lighting. The residue is visible but very faint. The photo on the right shows the same coupon under a 50W halogen lamp. The hazy residue becomes much more pronounced under the high-intensity light source. 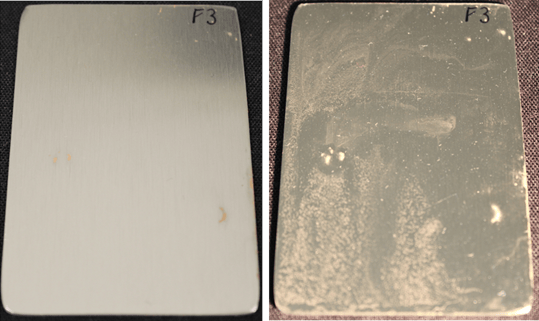 Viscosity modifiers, such as carbomers, celluloses, and xanthan gum can swell, creating a hydrophilic layer that is difficult for detergents to penetrate and making removal less effective. When hydrated, a thickened “gel layer” becomes visible. However, when these residues dry, the only evidence is a faint tan residue or no residue at all. Because of this, when evaluating detergents on soils that contain these components, Dober looks for swelling during the final rise step and also uses offset lighting to look for faint tan residues. The photos below show a coupon soiled with a haircare product that has been thickened using a carbomer. After cleaning, the hydrophilic gel layer is only visible when the surface is wet. Once dry, the residue can no longer be seen. After several repetitions of soiling and cleaning the same surface with an ineffective detergent, the residue builds up and becomes visible.

Certain celluloses and polymers can leave behind thin, transparent films that are practically invisible to the naked eye. They do not swell like the hydrophilic gel layers and they often go overlooked until microbial or carryover failures occur. During work with these residues, the Dober lab has found that these films can become visible in the presence of steam condensation. While this may not be practical in a large-scale field application, it has proven to be a valuable detection method when evaluating detergents for complete removal in a lab setting.

The photos below show a coupon soiled with a liquid oral suspension containing sodium carboxymethylcellulose. When cleaned with an ineffective detergent, the residue cannot be seen once the surface is dry. However, when placed in the presence of steam condensation, the film becomes visible. 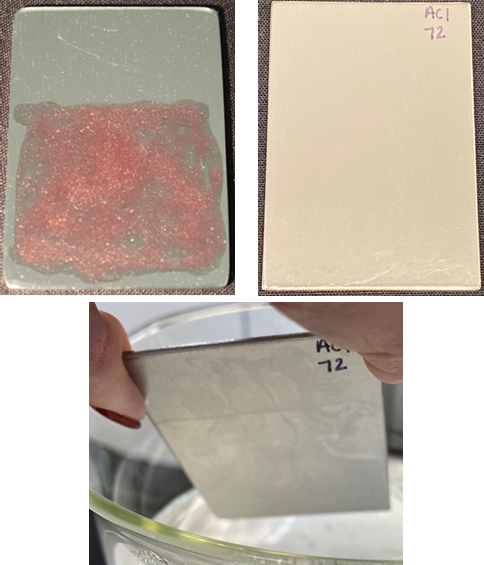 In summary, it may be difficult to determine if your cleaning process is successful when dealing with hidden residues. Cleaning experts at Dober are aware of the potential for certain products to form residuals that are challenging to detect. This awareness combined with the detection techniques outlined above allows Dober to ensure that we are recommending a detergent and cleaning process that completely and consistently removes any residuals. This results in increased cleaning efficiency and avoids problems from occurring after subsequent batch production.

How to Clean Cosmetics

New innovations in cosmetics have resulted in the development of products that are not only highly... 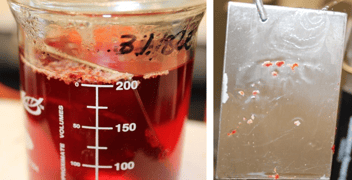 How to Tell if You are Using the Wrong Detergent

One of our top goals with Chematic® at Dober is to provide our customers with the optimal detergent...

What is TACT and Why is It Important?

The key to a successful cleaning study is providing a recommendation that not only removes the soil...